The Do’s And Don’ts Of A Grease Fire 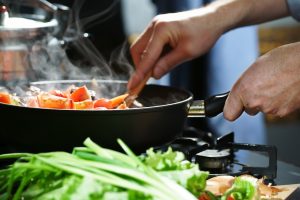 Every year, about $463 million dollars are spent on fire damage recovery from household kitchen fires. About 1 in 5 cooking fires are caused by grease. Although most people know how to put out a grease fire, that knowledge is forgotten when actually responding to a fire outbreak. In emergencies, our brain goes to “recall” mode. In recall mode, we only remember topics that have been repeated over and over again. So, in efforts to make grease fire responses readily accessible in our recall centers, we at Kade Cleaning Systems would like to take a minute to review proper methods for handling grease fires in Lee’s Summit homes.

It’s our hope as well as yours that you never have to experience a grease fire. Thankfully, they’re largely preventable. Simple safety measures can greatly reduce the risk of a fire in your Lees Summit home. However, if you’ve sustained kitchen damage as a result of a grease fire, contact our professional fire damage team to restore your kitchen.

Kade Cleaning Systems is a local business that offers 24-hr Emergency Flood, Fire & Mold testing/removal service. In addition to our specialized services, we also provide contents cleaning and restoration. We are here when you need us!

We Accept All Major Credit Cards: